This is a well-written, captivating story. Hard to put it down. …

This is a well-written, captivating story. Hard to put it down. Gives good idea about mexican life, at different layers of the population. 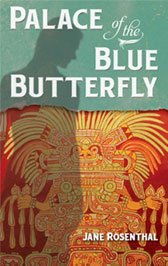 Part 4 | The Mexican Revolution and Like Water for Chocolate (READ: Part 3)

The years from 1870 to 1910 in Mexico, known as The Porfiriato after the dictator Porfirio Diaz, gave rise to rapid development, foreign investment and opulent lifestyles much like those of our own Gilded Era. Actually, the beautiful mansion Vivienne has acquired in Palace of the Blue Butterfly dates from the Porfiriato.

The extravagant excesses of the very wealthy and the concentration of goods and capital in the hands of few people, many of them foreigners, set the stage for the Mexican revolution of 1910.

Laura Esquivel’s lovely novel Like Water for Chocolate mirrors both the authoritarian dictatorship of Diaz and the passionate revolutionary zeal of a new nation finding its own modern identity, with the former symbolized by Mama Elena and the later by Tita and Pedro’s great love.

Chocolate, of course, was present even during the revolution, and in one of the book’s scenes, Tita has to prepare chocolate for 150 revolutionaries brought to the ranch by her sister Gertrudis.

In her novel, Laura Esquivel gives this description, more or less, of the very ancient way of making the chocolate tablets: The first step is to toast the chocolate beans in a metal pan. Make sure to mix several types of beans with no defects. Second toast them only until the moment they begin to give off the oil. After the beans are toasted, they are cleaned through a sieve to separate the hull from the bean. Finally, the toasted chocolate beans are ground on a metate under which a pan of hot coals has been placed. Once the metate is warm, begin grinding the chocolate. Here you mix it with sugar, ground almonds, cinnamon, as you wish. Divide the chocolate into circles or squares and leave out to dry in the air.

You could do that or you could do what I do. Whenever I’m in Oaxaca, I make sure to go to the Mayordomo chocolate factory. Here you can chose your own mixture of beans, your own level of sweetness and your own preference of additions like vanilla or cinnamon.

And if you want to make hot chocolate for your true love, here’s Tita’s recipe!

Chocolate al la Tita (From Like Water for Chocolate)

“. . . . beat a square of chocolate in water. The amount of water used should be a little more than enough to fill the cups. When the water comes to a boil for the first time, remove it from the heat, and dissolve the chocolate completely; beat with a chocolate mill until it is smoothly blended with the water. Return the pan to the stove. When it comes to a boil again and starts to boil over, remove it from the heat and beat the chocolate. Pour half into a little pitcher and beat the rest of it some more. Then serve it all, leaving the top covered with foam. Hot chocolate can also be made with milk instead of water, but in this case it should only be brought to the boil once, and the second time it is heated, it should be beaten so it doesn’t get too thick. However, hot chocolate made with water is more digestible . . .”

In describing the book the author writes: “A passionate Mexican love story that will warm the very depths of your soul, the romantic tale of Pedro and Tita describes how love and lust make them lose sight of all reality. . . all women who believe in the power of everlasting love should read it.”

A Zapotec woman in Oaxaca once told me that they believe that the energy and love of the person making the chocolate in this manner is transferred to the person drinking it. Keep that in mind as you make this drink.